...the story of Barry the Barred Owl...
It all began one sunny Friday in late April when a dead tree was cut down.  A small owl was found on the ground clinging to a branch.  The owl was placed on an old shirt in a cardboard box. 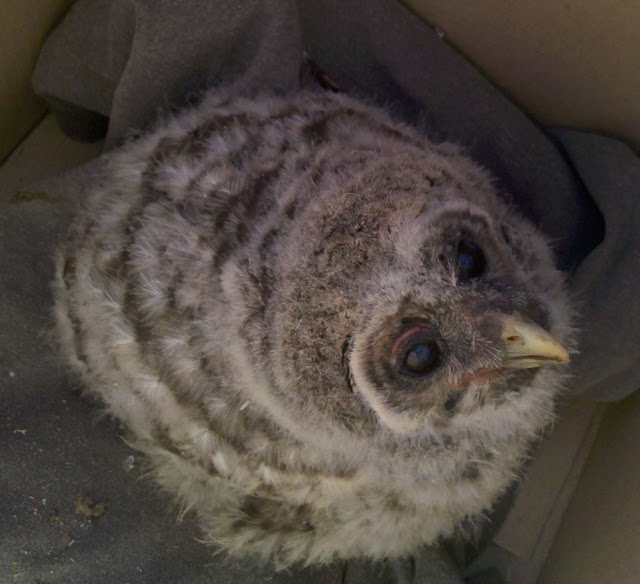 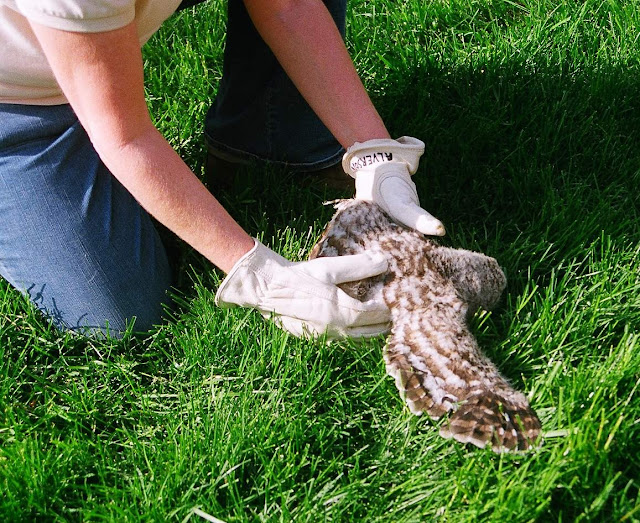 (Cindy teaching about the owl)
The neighborhood children and adults gathered 'round to hear tales of raptors and to learn about this particular species of owl.  The children named him "Barry."* 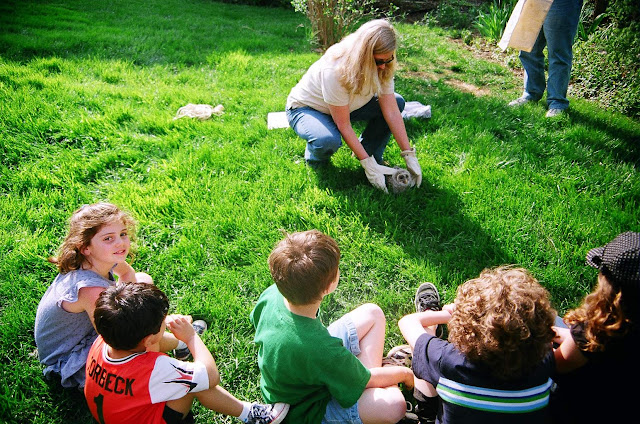 Soon a "nest" (plastic milk crate) was roped to a tree near where the original nest had been. 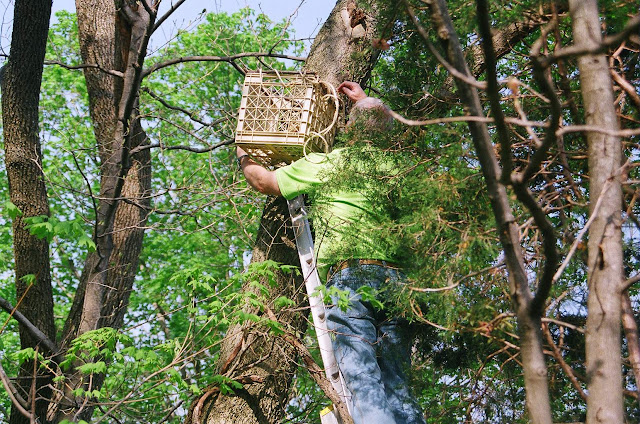 (Marc attaching the nest)
It wasn't long before both parents visited the nest.  After that initial visit, as far as we know, only the mother stayed at the nest.  (The father hunts, brings the food to the mother, who then tears it up and feeds it to the baby.) 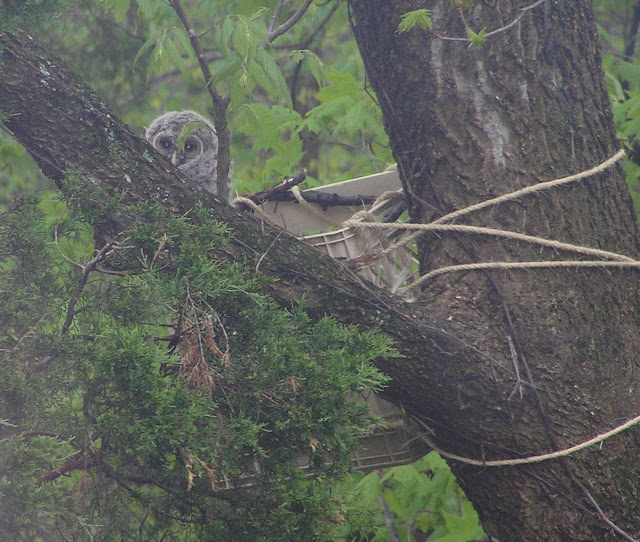 After a couple days, Barry moved out of the nest and sat on the edge of the crate. 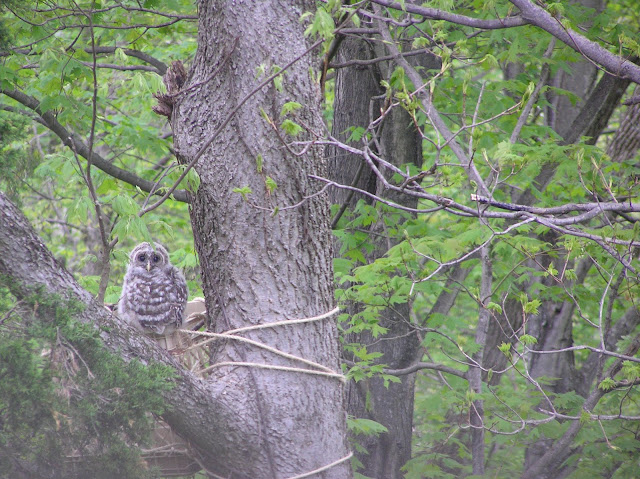 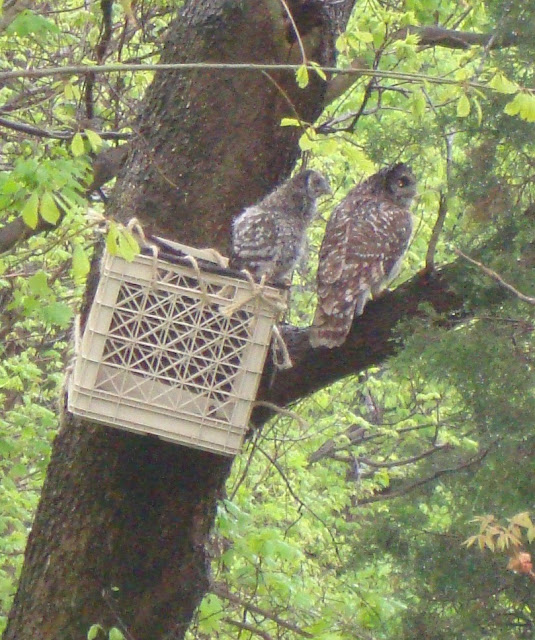 His mother spent most of her days and nights sitting with him on the edge of the nest. 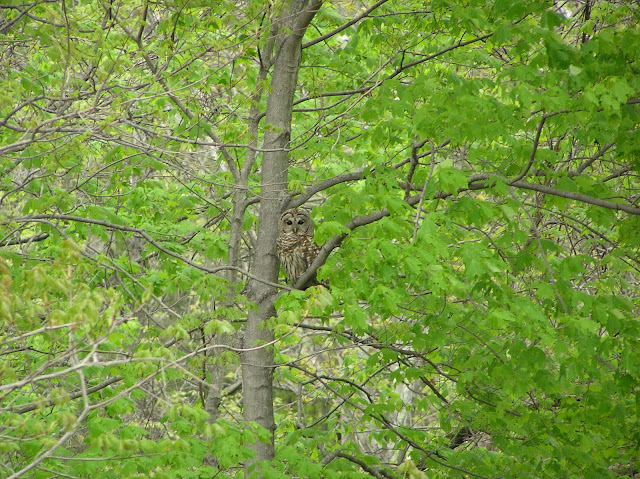 (mother in nearby tree)
She shooed away squirrels and kept him safe. Then one evening, Barry was gone!  We imagine that he is happily hopping from tree branch to tree branch.  In about a week he will fledge.  His parents will stay with him for a bit longer teaching him to hunt and continuing to feed him.


TIMELINE of a barred owl's life:
ⓄⓄ parents mate for life
ⓄⓄ nest is usually in a tree cavity
ⓄⓄ female lays 2-3 eggs per clutch
ⓄⓄ eggs are brooded by female which then hatch about 4 weeks later
ⓄⓄ female remains with young while male hunts and brings food
ⓄⓄ young owls first hop out of the nest onto other branches at around 4 weeks
ⓄⓄ owls fledge at about 5-6 weeks
some FACTS:
ⓄⓄ scientific name:  Strix varia
ⓄⓄ also called a wood owl or hoot owl
ⓄⓄ calls hoo hoo hoo-hoo or "who cooks for you"  Male's voice is lower than the female's.  See links below for sound recordings.
ⓄⓄ brownish grey with white bars across their chests
ⓄⓄ no ear tufts
ⓄⓄ found across Canada and the Eastern US south to Mexico. More recently this species has been found in the Western US as well.
ⓄⓄ Adult is 16-25 inches long, about 1-2.5 lbs, with a wingspan of 38-50 inches.  Female is larger than the male.
ⓄⓄ not migratory; territory is about one square mile
ⓄⓄ lifespan is about 10 years in the wild, 23 years in captivity
ⓄⓄ prey:  opportunistic meat eater--birds, squirrels, rabbits, chipmunks, voles, mice, frogs, lizards, insects, and more
ⓄⓄ If a juvenile falls out of the nest, it may be able to climb back up the tree using its sharp talons and beak.


LINKS:
information and a few photos
barred owl habitat MAP
more facts
owling.com
The Owl Pages
All About Birds scroll down for a variety of sounds these owls make

A huge THANK YOU to Cindy and Marc of Raptor, Inc, who took care of this baby owl, banded and re-nested it!
RAPTOR, INC. is a non-profit organization dedicated to the preservation of birds of prey through rehabilitation, education, and conservation.  (Click the link in brown above for more information.)