Angels Landing is a towering 5785 foot monolith gracing Zion National Park in Southern Utah.  The hike, with an 1488 foot elevation gain, up this narrow fin is one of the most thrilling in the National Park system. 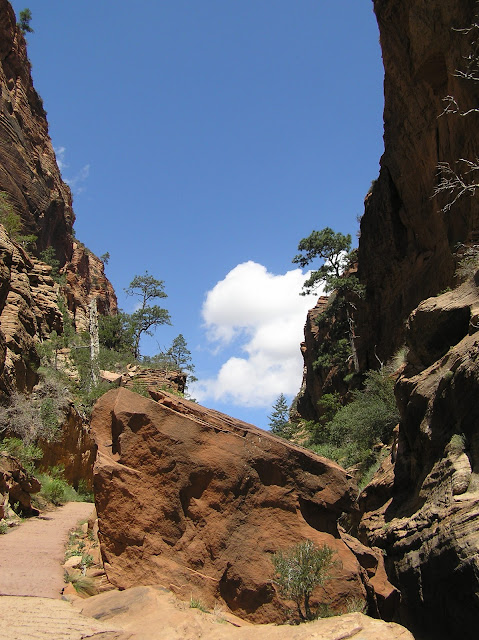 The trail up to Angels Landing starts at The Grotto.  Farther along, the trail begins to get steep.
The trail up this exposed ridge is steep and narrow with long drop offs sometimes on both sides.  The views, however, are spectacular! 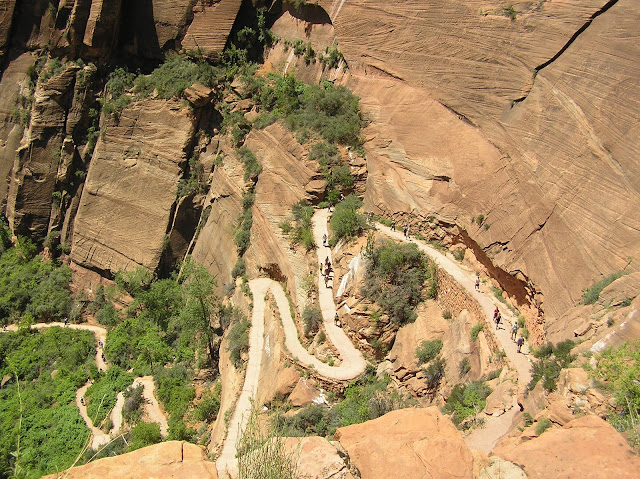 looking back.  still near the beginning. 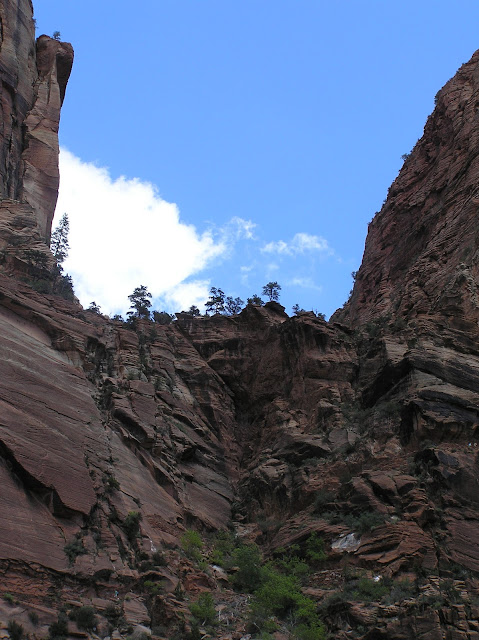 Looking up, there is spectacular beauty!
After hiking through Refrigerator Canyon, we begin the portion of the trail called Walter's Wiggles, a series of 21 tight switchbacks going straight up.  (Check out the links below to see photos.  One is starred.  Look quickly to see what this really looks like.) 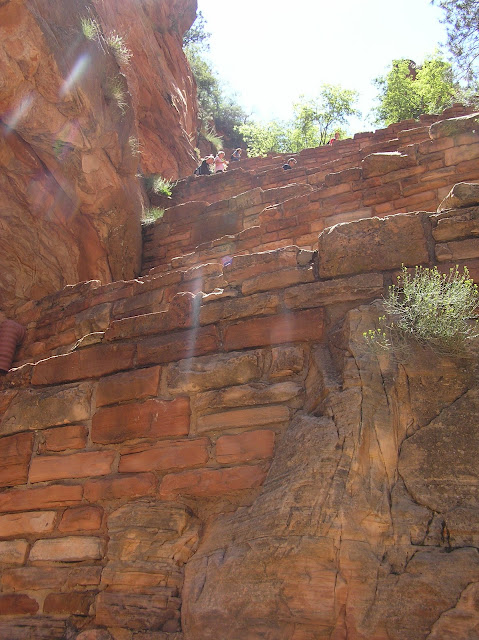 looking up at the last few switchbacks of Walter's Wiggles
(To get a sense of what this is really like, check out the links below!)
After making it to this point, we come to Scout's Lookout, a large flat area with restrooms.  Many people stop at this point because the next section is scary as you will see.  Here we stop to eat our sandwiches. 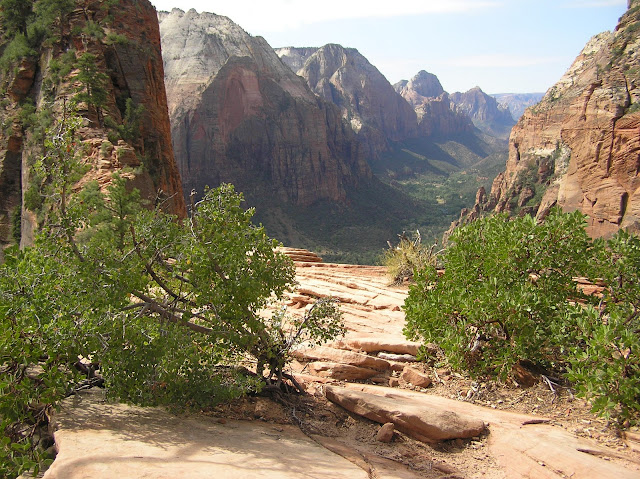 Next up:  the chains!  The last half mile is across a narrow ridge with drop offs on either side.  Along most of this section, chains are anchored into the rock. 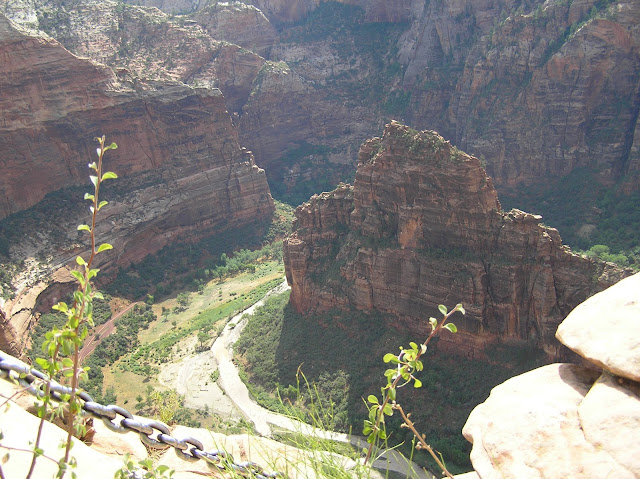 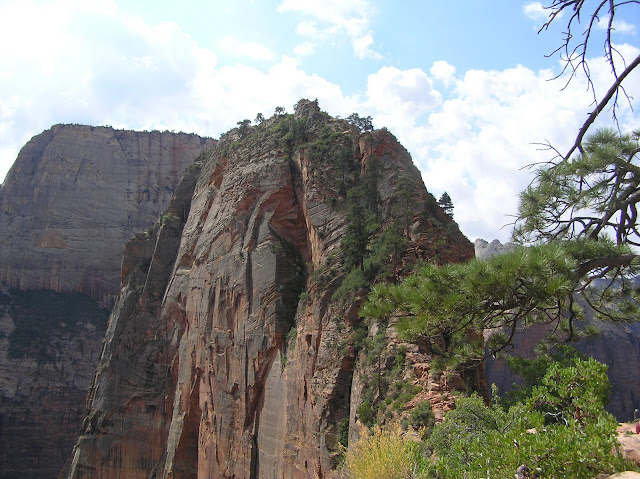 There is a section about a quarter mile long of scrambling up rocks, holding on to the chain.  We made it!  The end of the hike!  NOT!  Look ahead and above--there's the last quarter mile!  up that fin!  (You can see part of this trail under the pine branch.)
Disclosure:  I stop at this point and take photos of the brave souls continuing on.  That would include my husband and our friend Pam. 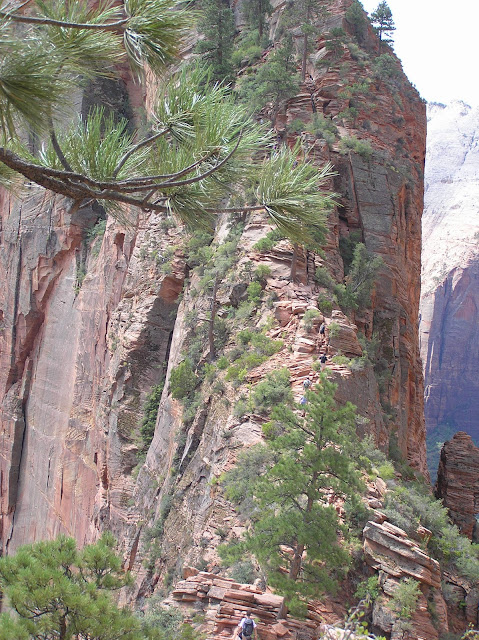 See the narrowness and drop offs on either side?! 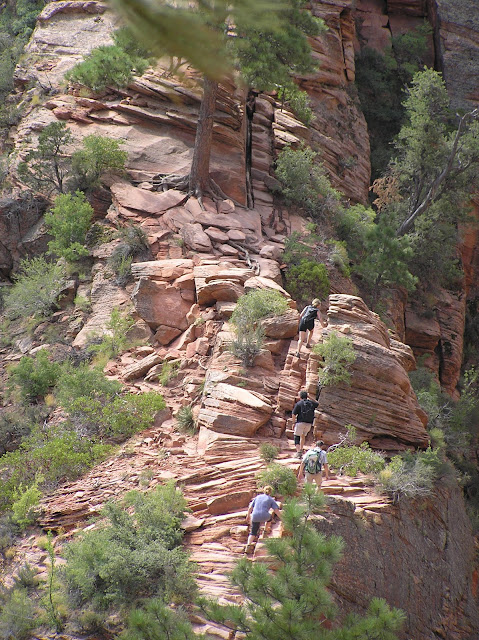 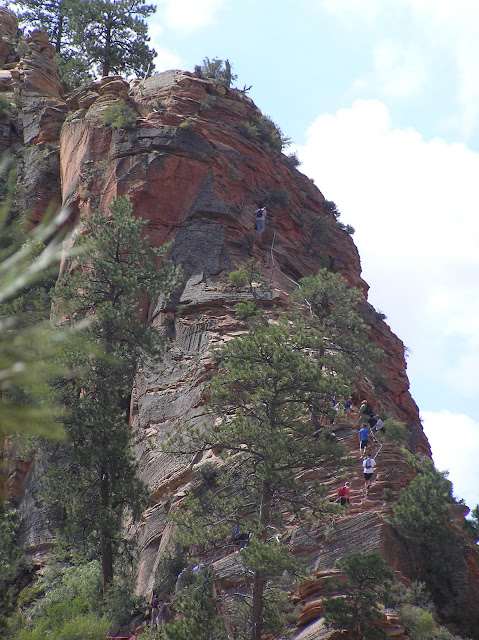 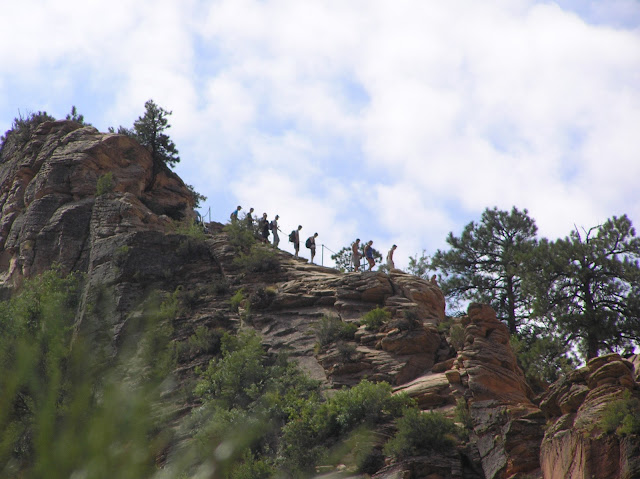 coming back down from the very top.
Actually, coming down was much easier and less scary than going up.  If I had known that, I may have continued on at least for a bit.
On our way back down now. 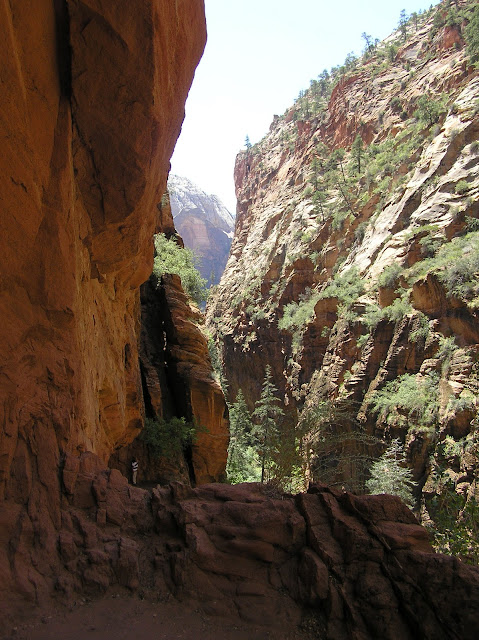 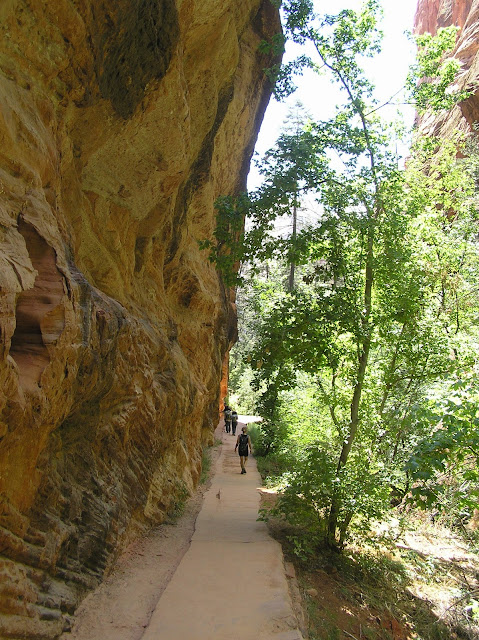 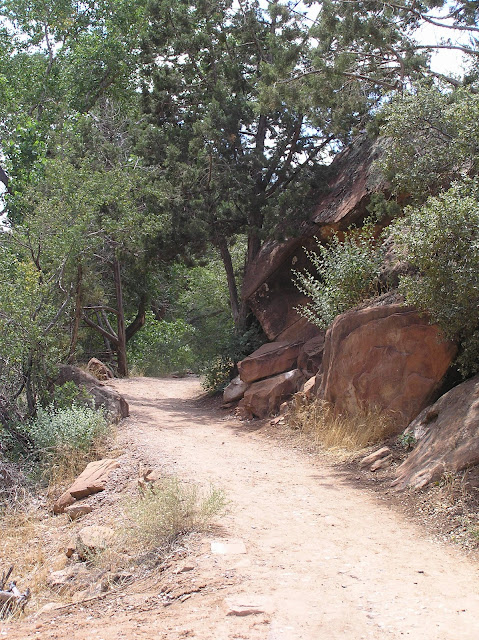 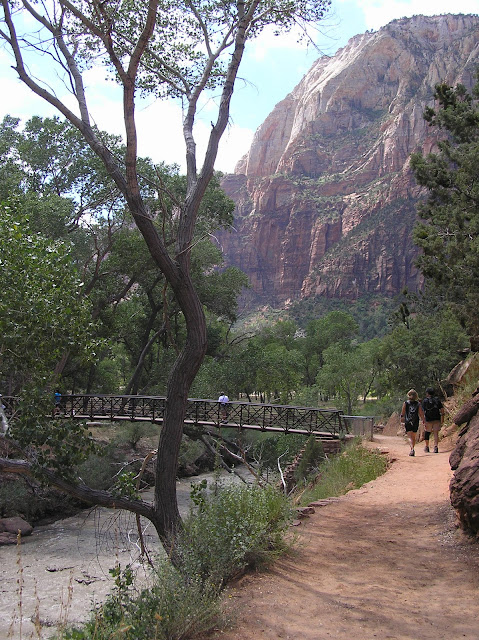 the end of the trail--the bridge over the Virgin River
LINKS:
Zion National Park Angel's Landing information
National Park Service virtual hike
Joe's Guide to the hike complete with topo map
great trail photos --see Walter's Wiggles 2nd row 3rd from left
*great photo of Walter's Wiggles-- a must see!
another Zion POST with some links
good trail information
Walter's Wiggles were named after Walter Ruesch, the first superintendent of Zion National Park.  He oversaw the construction of the West Rim Trail as well as the trail up Angels Landing.  He wanted a trail that was functional yet melded into the landscape. 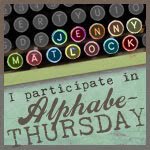 I'm so happy Ms Jenny has decided to do another round of Alphabe-Thursday! This is such a fun meme!  Thank you, Ms Jenny!  Come and join in the fun!  You will be charmed and even enlightened in a delightful way!  See more entries HERE. This week we are at the beginning of the alphabet with the letter "A."

I'm also participating in SkyWatch Friday, another fun meme with lovely photographs from all over the world!  SkyWatch Friday is hosted by Wren, fishing guy, Sylvia, Klaus, and Sandy.
photos by me © 2010
Posted by Splendid Little Stars at 5:40 PM